After I posted my Permullet pics, I realized that I had kind of jumped the gun as far as my mullet pictures go. The Permullet was the third of five phases of my mullet "career," if you will, so I really should have started from the beginning. Allow me to do so now . . .

When I was around 8 years old, I got my ears pierced at the Piercing Pagoda at a mall in Dallas. It was a horrible experience and I was QUITE misinformed about the entire procedure. I don't know how I thought earrings got into your ear lobes but it certainly never occurred to me that they would be SHOT into them with a GUN. They did one ear and that was a deal-breaker for me. I began to wail and to try to escape the chair I was in - there was no way they were going to shoot me in my other ear. Suddenly, passersby began to stop and gather 'round the Pagoda to watch the scene that was unfolding.

The high school student who was entrusted with this weapon tried to assure me that it would all be okay. She hadn't realized that she had completely lost my trust when she fired a sapphire-covered NAIL into my ear. Seeing that she was getting nowhere with her kind assurances, she resorted to a teenager's best friend . . . peer pressure. She began to say things like "You don't want to go around with only one earring in your ear - you'll look funny." That's okay. I don't mind. "No, you don't want to look like a pirate, do you?" ARRRRRRRRRRRRe you kidding me? Of course, I do! Who wouldn't want to look like a pirate? "People will laugh at you." I love laughter. That's fine with me.

She finally convinced me with sugar. She gave me a lollipop and told me that she would count to three and that I could crunch down on the lollipop at the same time she shot me. So that's what we did and I ended up with two pierced ears and a general mistrust of people at mall kiosks.

A few days after I got my earrings, I had to get my haircut. My hairdresser, Mitzi - yes, I said Mitzi - told me that she could give me a haircut that would really show off my earrings. It was called a bi-level and it would look BEAUTIFUL on me. I was sold and that was the beginning of what I like to call the Mullet Era. And Mitzi was right - you could see my earrings . . . 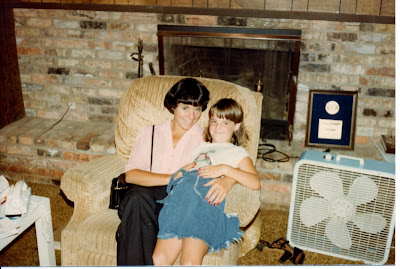 And you know what? I appreciate that about the mullet. I mean, I really thought I was going to die at the Piercing Pagoda, or at the very least experience some sort of shock or pain-induced seizure. So I'm glad I got to show those puppies off.

But it's not just the earring factor that makes it such an amazing haircut. One of my favorite things about the mullet is that HALF of your head is bangs. It's mesmerizing, really. Take a gander for yourself . . . 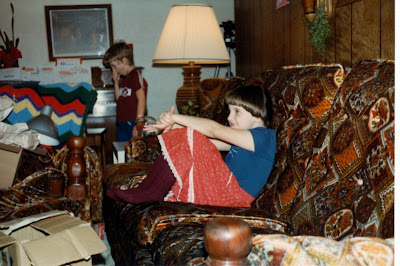 In fact, when you pull your hair up in to a ponytail, you can even fool people into believing that you actually have a bob. Like so . . . 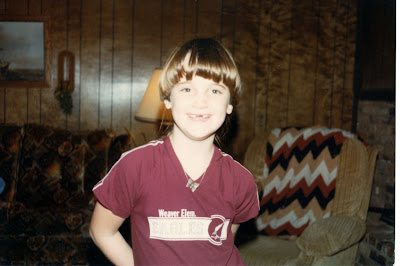 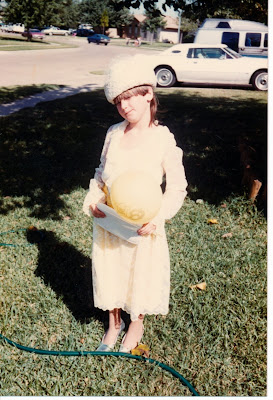 I've never been embarrassed about all the mullets in my past because I have always found comfort in that fact that it was the 80s. In Texas. EVERYONE had them. Right? So imagine my horror when I discovered my 2nd grade picture a few days ago. Notice me . . . Catherine . . . a/k/a The Lone Mullet . . . smack dab in the middle in the back row. 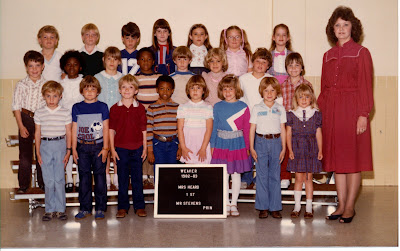 But pictures aren't the only place in which the memory of my many mullets live on. My mom recently found some of my old school papers when she was going through some old paperwork. One of the papers was a worksheet where we had to answer questions about ourselves and there was a series of questions about our hair. One question asked "Does your hair cover your ears?" My answer . . . "Halfway." When my mom showed me that, I laughed and laughed. But now, I imagine myself working on that worksheet and trying to figure out the answer to that question. First, I probably tried to look at my earlobes by looking out the corner of my eyes. Then I probably tried to just feel my ears. Somewhere in the process, I probably became acutely aware of the fact that the other kids had a simple yes or no answer to that question.

But at least you could see MY earrings . . .

Another winner Cat! I really started laughing hard at the school picture. I guess the evidence was pretty clear at that point!

I'm crying! The part about trying to console yourself that it was the 80's, and yet evidence shows it was not necessarily all the rage!!:) Looks like you have more writing material in the clothing choices of the 80's! What's with you and Erin pairing up blue with maroon??