My roomies and I had dinner at one of our favorite Mexican restaurants last night - Rico's in Alden Bridge . . . have you been there? It's yummy, yummy! ANYWAY, we normally sit toward the front of the restaurant in a booth but this time they sat us down in the back room where we had the good fortune of viewing a large, three-wall mural of a village market. There are no words to describe this mural and, honestly, there are some parts of it that are positively frightening. So I thought I'd share my favorite parts with you. 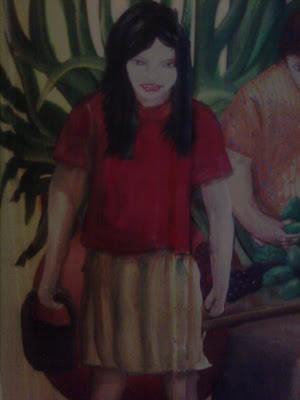 Try enjoying fajitas while she's watching you. I'm actually not sure what curse I've brought upon myself by taking her picture and posting it to this blog. If your computer screen turns to snow, I'm sorry.


Next, there's the Ring girl's evil and possibly mute brother . . . 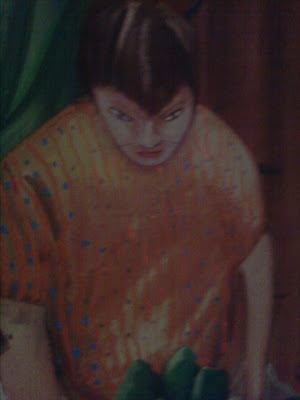 This picture really doesn't do it justice, though. I mean, he's SPOOKY and he looks right at you . . . no, right THROUGH you. And I'm DEFINITELY not buying any of his avocados. Unless his sister tells me to. I'll do whatever the hell she says. 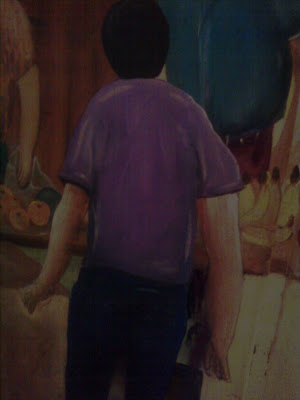 Seriously? What an unfortunate body shape. And I'm so glad that when I eat things, they go straight to my hips and not to my right arm. His right shoulder must be so tired by the end of the day. 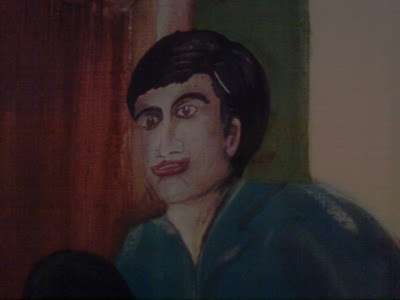 He's clearly stumbling into the market after having all the blood drained from his body. Either that, or he's recovering from his lip transplant surgery. Those lips are awesome. I think I should get my 4 year old niece to do their next mural. 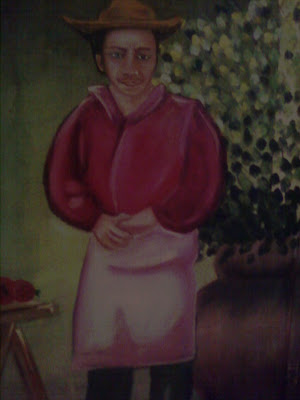 Where is his hand? Someone arrest that guy.


Then we have the local boy suffering from elephantitis of the bicep . . . 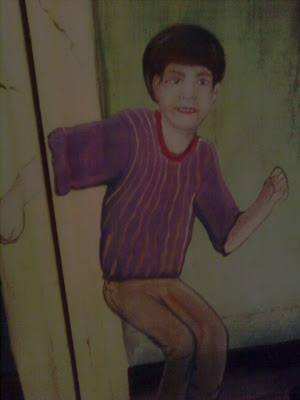 Not sure if he's frolicking around the village, dancing, doing Hip Hop Abs, or racing off to his next arm-wrestling match but God bless his joyfulness while lugging that thing around. 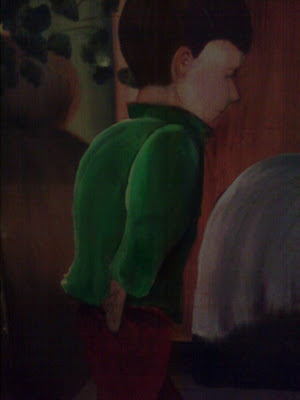 I wonder what kind of tragic mural-village accident could have caused this kind of unfortunate deformity. Maybe he stared into the eyes of the Ring girl? Maybe there was a tragic arm-wrestling accident with the bicep boy and this kid's arm was snapped off? After all, can we expect bicep boy to really understand the power of that thing? Well, at least we know our young amputee is 50% less likely to fill the village pervert's shoes when he grows up . . .

So there you have it - the colorful and strange mural-village that entertained, frightened, and perplexed us while we ate. Now, I didn't take a picture of the woman with the 5:00 shadow or the boy staring at the crucifix but, don't worry, they are all there waiting for you in the back room at Rico's in Alden Bridge . . .

Posted by Catherine at 9:39 PM

Okay you need a disclaimer to your log to not read it @ 1230 am in the morning b/c I think I woke up Michele with the laughing. That is some funny stuff. I have eaten there but really never noticed or paid attention to the mural.
We go to Las Fuentes in Magnolia (barely out of The Woodlands) I will have to see what kinda of whacky stuff they have there.

omg...I'm dying. The slopey shoulder guy and his right arm had me crying I was laughing so hard. Seriously, who the hell painted that? Maybe they were over budget, so they just had some of the wait staff pitch in?

Quite funny, Ms. Palmore. I thought you might go to hell for making fun of the blind guy on AI, but this removes all doubt. BTW, he's just scratching- all men do it!!!

I'm hoping they didn't pay whoever did the mural. Maybe they indulged the son/daughter of the owner?

I'm totally having nightmares about those first two whackos! You can make ANYTHING funny!! I kinda want to go eat there now!......with you! :)

Seriously......it's even scarier in person! That's awesome Catherine and you described them perfectly!!! HA!!! You had the worst seat because you had to look at them while you ate! I have to say that if you just put the blood back into the Village Zombie he looks even more like Anoop Desai in this picture than in person....I think it's the eyebrows.

Ok Catchy... We (pawpaw, mimi, bradyn, dustin, and me) left my house last night at about 8pm and drove all night to the house in Salida. This morning as we were still driving, completely cross-eyed with extreme fatigue and exhaustion, I logged onto the computer using my dad's sprint card- only because I was hoping to see a new post from you. I was so excited to see that you had a new entry-
Anywho, as I was laughing uncontrollably I began throwing my head back against the seat rest. Somebody should have drawn a mural of me during this time cause I would have fit right in with those other weirdos.
I LOVE LOVE LOVE having this blog as my daily soul food! :)

funny stuff! i miss rico's. the original one was in kingwood, you know.

Think I like the "pervert" the best -- i identify with him the most. What's funny is that i read the tag, then slowed scrolled down thinking you were talking only about his face, which wasn't very funny. As i kept scrolling, i got far enough down to immediately know to what you were referring, THEN got it! hilarious. then, the 50% comment about stubby had me cracking up.

it wasn't the staff who painted it, that IS the staff, no? is "pervert" the one in the kitchen preparing your food? oh the nagging, unanswered and uneasy thought that surfaces.

I am reading this again for the 100th time and laughing just as hard as the first time! You have a wonderful gift and I'm glad you are putting it to good use.

It's really hard to explain to a classroom of second graders why their teacher is crying and her shoulders are shaking when reading this. They thought I was dying! I cannot tell you how much my stomach hurts from laughing so hard. My face will be red all day now from the tears. By the way, don't ever try to explain how funny this was to others with words only. When they aren't actually looking at the pictures, people just think you're making fun of the handicapped.